When the user system was designed and implemented, an internal IT support solution was in mind. It was a very simple role-based system with Users, Support, and Admins. Each role was stored into a single user bucket, with the roles only thing differentiating them. The initial implementation (4 years ago) all tickets were routed to a single IT support bucket. Any IT agent with the support role could create, edit, or delete tickets as they saw fit. As the project grew this model quickly caused more and more issues.

Its simple; the entire user and group system have to be redesigned and re-implemented.

This will pave the way for features such as automatically routing tickets to departments, customized ticket forms based on ticket types, and more granular control over users/agents.

With this change, comes a new customer portal. Deployments can have a front end area for users to submit, login or quickly check the status of an existing ticket. To maintain an SSO (single sign-on) implementation, users and agents will use the same login page with routing done accordingly.

How does this affect existing deployments

With these breaking changes comes a lot of database modifications for existing deployments.
The migration will convert any users marked as Support, Mods, Admins to agents. Agents with support and mod role get assigned the default role of support agent and admins the default role of admin with the agent flag enabled.

Due to the number of changes required for the new system, implementation will happen in phases.

Any feedback or suggestions from the community is highly encouraged.

Will the changes to the permission system allow for admin to see tickets ? At the moment my admin can not see any tickets am I right ?

Would it be possible to allow access to features to be edited in the front end. For example disable messages for a defined customer group.

This is part of the design flaw in the beginning that I am working on correcting now. The new permission system will allow you to set admins to see and manage any ticket regardless of what groups the account it is.

My goal is to provide permissions for all aspects of trudesk. Allowing you to enable and disable any features for any role.

Alright got you. Looking forward to the new permission system.

Is there any prediction for a launch of this new design? We really like the way the system looks and the reporting features but the client facing portal is a key feature that we need before retiring our old ticketing system.

I’m hard at work on it. Its the primary focus. I just rolled out the permission update that was needed before migrating to Teams.

I’m working on the Teams now. Its coming soon, I promise. Its an entire rewrite with one person on it.

Sounds great. I appreciate the response

@polonel since updating to 1.0.8 all our support roles can no longer update tickets. Our permissions seem to be set correctly. Only admins are able to update 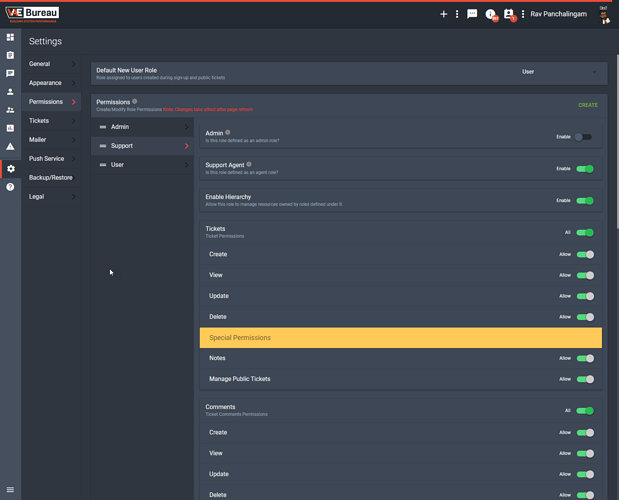 Yes this is a bug with the permission hierarchy. Any role (except admin) is not allowed to update other users (with matching role) tickets. I’ve been working on a fix without affecting the lesser permission roles. (ex: Users role should not be able to edit other User roles. Just tickets owned by them)

Is there any date for the release of this feature? At least of the fix that user with admin role can see 100% of created tickets?

Its current on the develop branch for testing. Please be sure to test on a non-production environment. You can always backup your trudesk instance and restore it to another test environment.

Is there a guide to use a branch different from master?